Changes in Baby Sleep at 5-Months

For those who have been following our baby sleep training series, I thought I’d give you a little update on how we’ve been doing. We’ve seen some changes in Bibi’s sleep patterns now that she has morphed from a sleepy newborn into a more alert infant. With it, there are a few new sleep challenges and some new crib safety precautions we had to deal with.

After Bibi got through her 4-month sleep regression, she was able to get back into her “long sleep” routine each night. Instead of the 12-13 hour nights she used to do when she was 3-months old, she now sleeps 11-12 hours with 3-4 daytime naps totaling 14 – 15.5 hours of sleep per day.

We continue to practice the same nap hygiene as when we first started sleep training which is to limit the duration of her naps to between .5 – 1.5 hours. Her longest nap at 1.5 hours is after her first feeding because, like most babies, her tolerance for sleeplessness is lower in the morning and increases throughout the day.

Bib’s last nap of the day is the shortest at half hour which she takes at 5 pm, very close to her approximately 7-7:30 pm bedtime. At first we were weary of giving her a nap so close to bedtime because I heard some parents like to build a longer sleep deficit before bedtime. But, personally, we found that without this short nap, she is often too over-tired by 7 pm and end up struggling to sleep until 8 pm. If she ends up overtired, there’s a lot of crying and tantrums at bedtime but if she has her last nap, she is in good spirits during her bedtime routine and this lasts until she needs to be laid down in her crib awake.

Of note this month was Bibi’s refusal to take her usual daytime naps at the beginning of the month. It seems that after her 4-month sleep regression, in which we saw Bibi transform from a sleepy newborn to a more alert infant, she wanted to do more and naturally, she had to be awake to do them. We tried to put her down for her naps at the same time we usually do but she would have none of it. She fought through 2 of her 4 naps; when she was awake, she’d play and practice bobbing up and down trying to get onto all fours. There was nothing we could (or needed) to do than to just let her stay up and play through her nap time. After a one-week period of this, Bibi started napping again as usual.

A new sleep challenge this month happened during a 10-day stretch in which Bibi would wake up screaming. It wasn’t a whiny cry but violent screams that caused us to rush into the room without practicing, Le Pause, the French parenting method of simply observing and allowing sleeping babies a chance to soothe themselves back to sleep once awakened.

Once in the room, we’d find Bibi with her eyes closed but screaming. We would pick her up immediately and hug her but that was usually to no avail as she would just continuing screaming while held. We came to the conclusion that she was probably just having a bad dream or something of the sort because when we turned on the lights and let her wake up, she would look around the room and get re-orientated. We would both (yes, mom and dad both wanted to be the hero here, haha) hug her and cheer her up. She would smile back at us and it reassured us that she felt safe again. After seeing that, we just put her down in the crib on her back and she’d do her little flip and fall back to sleep on her belly.

A new issue of concern that occurred this month for Bibi – and for the other same-aged babies we knew personally – was her little legs getting stuck in between the crib slats. One of the mommies wondered if she should use a crib bumper to help prevent this. Personally, I wouldn’t choose to use one since I like to err on the side of safety.

“Don’t use bumper pads or other products that attach to crib slats or sides. They could suffocate or trap your baby.” Source: Healthlink BC

Although it was alarming to hear Bibi scream for help when she was stuck, I found that after about a week, she was able to learn to get out on her own. Only once did we encounter a case in which even we had a difficult time prying her leg out from between the slats. She was wailing and in obvious distress but hubby was quick to wiggle her leg back and forth in order to dislodge it.

Near the end of the month, I found Bibi sitting upright in her crib and playing. That was the first time I saw that she was able to get herself into a sitting position and sit completely unassisted for an extended period of time. For her safety, immediately that night, we lowered the crib.

“Help prevent your child from falling out of the crib, the leading cause of crib injuries, by adjusting the mattress level as he or she grows. Start lowering the mattress no later than when your child begins to sit with little help. Adjust the mattress to its lowest setting by the time your baby can stand.”

Thanks for coming back and checking in on Bibi and I. We will continue to update you on our sleep journey where we see fit. (Read: 9-month Baby Moving From 3-nap to 2)

I wish you a restful night ahead. 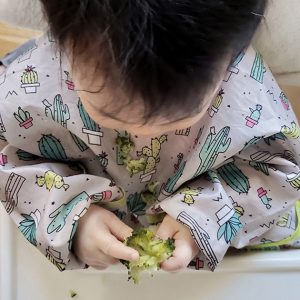 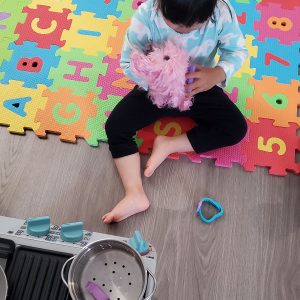 How We Encourage Independent Play From 1-2 Years Old 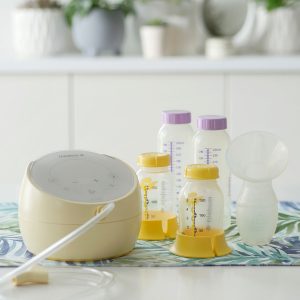 Weaning from Exclusive Pumping – How I Did It